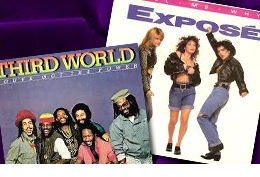 The 2021 Ultimate Disco Cruise lineup has just been announced and we can’t stop dancing with excitement as we hit the replay button (over and over again) on “Boogie Shoes” and “Ladies’ Night,” “Don’t Leave Me This Way” and “Rock the Boat.”  We’ve even added a few new songs to our playlist, reminding us that disco lives on through so many different eras and genres thanks to groups like Exposé and Third World.  If you’re not familiar with them yet, here are some interesting highlights!