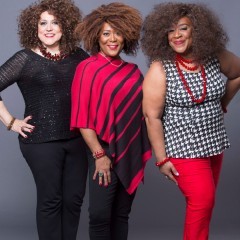 It’s time, at last, to break the ice with The Ritchie Family. This trio of distinguished vocalists were innovators of club music at the height of the disco era, and they remain so today, with a new look, a fresh sound and a hip, irresistible attitude.

It’s true—the Ritchie Family is steeped in disco history. The Ritchie Family concept itself started off as a studio ensemble that netted its producers a Grammy nomination for the hit dance track “Brazil” in 1975. In the mid-’70s, Cassandra Wooten, Cheryl Mason-Dorman and Gwendolyn Oliver Wesley became the voices and faces of the group. Cassandra and Gwendolyn had been performing in a group called Honey and the Bees out of Philadelphia, and they soon partnered with Cheryl, who they met at a performing arts school. They were the perfect vocal trio to represent and deliver the “Philly Sound” (a warm and uplifting hybrid of soul and disco) sought by Jacques Morali, Henri Belolo and Richie Rome, the gentlemen who had produced, arranged and/or fashioned “Brazil”.

Brilliantly teaming with Rome, Morali and Belolo (the latter two gentlemen the creators of Village People), the ladies helped ignite one of the biggest and most explosive disco hits of 1976 — the appropriately titled “The Best Disco In Town”. The track (lifted from their widely lauded LP Arabian Nights and a medley of some of the most popular disco songs of that period) was a Top 20 US hit on the Billboard pop singles chart. It also reached the number one spot on Billboard’s dance chart, packing dance floors throughout the last weeks of summer and achieving worldwide sales in excess of reportedly two million copies. “As much as we enjoyed all the little things that had come before, this was finally the moment where we thought we’d hit the jackpot…,” says Gwendolyn in James Arena’s book, First Ladies of Disco (McFarland Publishing). Their next album, the effervescent, disco-fused Life Is Music, solidified their appeal and influence on the club scene. African Queens, the ladies’ third set for the legendary Miami-based Marlin/T.K. Records label, brought the trio back to the top of Billboard’s dance chart with “Summer Dance” and “Quiet Village”.

The excitement of world touring, regular television appearances on Soul Train, Disco ’77, American Bandstand and other programs, and their lofty ranking in the clubs were among the vivid, memorable highlights of this time—and they still resonate strongly for the ladies. The Ritchie Family’s unique, inviting harmonies and irresistible beats became one of the most memorable signature grooves of the disco era. “The music we did with Jacques,” says Cassandra, “[definitely] had longevity and impact.”

By the end of the ’70s, tastes were changing, and The Ritchie Family’s producers sought to move the group in a new direction. The time had come for Cheryl, Cassandra and Gwendolyn to part from The Ritchie Family, but they continued to make an impact upon pop music. For a time, Cassandra and Cheryl advanced their music careers, providing backing vocals on John Lennon and Yoko Ono’s immortal 1980 album, Double Fantasy. Scheduled to go on tour with Lennon, the ladies were devastated, along with the rest of the world, to hear the news that Lennon had been killed. The ladies then put their music careers on hold for a number of years, instead pursuing other personal interests and family life.

After years of hearing other ladies sing their hits, Cassandra and Cheryl eventually decided it was time to regroup. With the introduction of singer, songwriter and choreographer Renée Guillory-Wearing, who took the place of Gwendolyn Oliver Wesley, The Ritchie Family was ready to reinvent their sound and bring their energy to the world of contemporary pop and dance music. In 2016, the trio released the single “Ice”, a heart-stopping musical journey that shows their still commanding vocal presence in a most unique, decidedly hip and deliciously unexpected way. Produced by legendary vocalist Martha Wash’s Purple Rose label (the same team that recently brought the group First Ladies of Disco back to the Top 10 of Billboard’s dance chart), “Ice” by The Ritchie Family promises to be one of the most talked about comebacks of the modern era. The track is filled with unexpected turns and irresistible positivity, much like the new Ritchie Family group itself.

The ladies have managed to beautifully straddle that fine line where the fun and festiveness of dance music history’s most celebrated period meets the drive and powerful edginess of the twenty-first century.