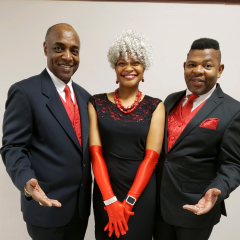 The Hues Corporation was a pop and soul trio from Santa Monica, California. They first formed in 1969 by Wally Holmes. Wally Holmes originally had a different name in mind for the trio. He wanted to call the group the Children of Howard Hughes; it was a pun on famous millionaire Howard Hughes. However, Holmes ran into a legal wall and was unable to incorporate Hughes' name into the group. That's when he came up with The Hues Corporation.

By 1972 The Hues Corporation was a regular sight on the Las Vegas club circuit, when they were signed by an executive from RCA Records. The Hues Corporation appears as the awesomely funky soul group performing in a nightclub in the groovy horror Blaxploitation cult favorite "Blacula." Their debut single "Freedom for the Stallion" reached #63 on the Billboard charts in 1973. In 1974 the band scored a massive smash success with "Rock the Boat;" the infectiously bubbly and upbeat tune peaked at #1 on the Billboard charts, sold a million copies, and holds the distinction of being one of the first major hit disco songs from the 70's. “Rock the Boat," has created the band's lasting legacy. It was an exquisite pop song, incredibly hooky and with a fine lead vocal by Flemming and harmonies that went on for days. It also boasted a new, danceable sound that became a forerunner to the disco beats that would arise soon after.

"Rock the Boat" has been featured on the soundtracks to such movies as "Roll Bounce," "Man on the Moon," "Lawn Dogs," "The Devil's Own," "Carlito's Way,” "The Spirit of '76," and “The Martian”. The song is also in M&M commercials plus episodes of the TV shows "The Sopranos," "The West Wing," "Ed," and "The Simpsons." The follow-up songs "Rockin' Soul," "Love Corporation," and "I Caught Your Act" all did fairly well.

During the latter half of the 1970’s several lead singers including Flemming Williams, Karl Russell, and Tommy Brown led The Hues Corporation. Around 1979, Kenny James took over as lead singer from Karl Russell. Kenny James was an internationally acclaimed singer and dancer. James can be seen in the Chilean TV-footage from 1979 promoting their performance at the Viña del Mar International Song Festival and is also shown on the cover of the group's last album "Boogie Me, Move Me" from 1980. Hubert Ann Kelley later left the group to become an evangelist. By 1978 their recording career had stalled.

Wendell E. Anderson, Sr. had a storied music career including Air Force Entertainment from 1979 to 1984. Wendell is a songwriter, choreographer, actor, and storyteller. Wendell worked throughout the Catskill Mountains hotel circuit for several years before relocating to L.A. in 1987. In 1989, Wendell was introduced to St. Clair Lee and invited to audition for the lead singer position with The Hues Corporation. Teresa Brown auditioned as well; she and Wendell became the newest members of The Hues Corporation. Several years later Teresa Brown was replaced with. Marie Elaine Woodard, a former Ray Charles Raelettes.

The Hues Corporation began performing again in 1990 for various concerts and TV specials with Wendell E. Anderson, Sr. as lead singer, St. Clair Lee, and Marie Elaine Woodard. The group continued to do concert performances and appeared in a 2004 PBS “My Music Series” television program. They also performed in the Far East, Europe, major venues in the U.S. including Asbury Park in NJ, The Greek Theater in LA, and Madison Square Garden. In 2004 they performed in Get Down Tonight: The Disco Explosion a musical documentary special which aired on PBS.

In 2009, Wendell relocated back to his hometown, Cincinnati, Ohio. Bruce Glover briefly filled in the role as lead singer for the group. In 2015 Wendell revived The Hues Corporation. With Elaine in Los Angeles and Wendell in Cincinnati it became challenging to maintain an outstanding performance group which The Hues Corporation is known for. Over the next few years various combinations of singers including Brenna Parker, Julian Johnson, Anthony Louis, Charles White, and Victoria Lynch were engaged before The Hues Corporation was rounded out with Jinnerva Shelery and Deondra Means in 2019, both of whom have vocal and theater backgrounds.

In September 2019, The Hues Corporation along with other national artists performed a live Saturday Night Dance Fever Disco show hosted by Denny Terrio with The Urban Guerilla Orchestra (UGO) as the backing band. The show held at the Thunder Valley Casino Resort in Sacramento, California would become the blueprint for more live shows to follow. The Hues Corporation was honored to perform in Buffalo, New York for the 2019 World’s Largest Disco. The group is scheduled to perform at the Saturday Night Dance Fever Disco Show on March 28, 2020 at the Agua Caliente Resort Casino Spa in Rancho Mirage, California. The group is also scheduled to perform on the 2021 Ultimate Disco Cruise. The demand for “Disco Music” is still prevalent and The Hues Corporation is ready to “Rock the Boat”.