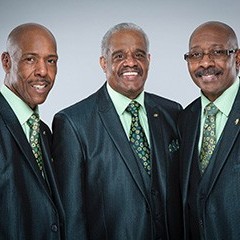 For over 30 years, Russell Thompkins, Jr. was the original lead singer of the Stylistics. His impeccable falsetto voice led the group to international fame and recognition, recording such hits as “You’re A Big Girl Now”, “Stop, Look, Listen”, “You Are Everything”, “Rockin’ Roll Baby”, “Betcha By Golly Wow”, “Break Up To Make Up”, “Stone In Love With You”, “People Make The World Go Round”, “Children Of The Night”, “You Make Me Feel Brand New”, “You’ll Never Get To Heaven”, “Let’s Put It All Together”, “I Can’t Give You Anything”, “ First Impressions”, “Love At First Sight”, “Hurry Up This Way Again”, “Love Talk”, and many, many more. Russell had the opportunity to work with such greats as Thom Bell, Linda Creed, Burt Bachrach, Carol Bayer Sager, Van McCoy, Teddy Randazzo, Kenny Gamble, and Leon Huff.

Russell’s distinctive falsetto was the driving force and backbone of the original Stylistics and it earned them (7) gold albums, (5) gold singles, (2) double gold singles, (8) platinum albums, (1) double platinum album, and (4) platinum singles, along with a Grammy nomination in 1974 for “You Make Me Feel Brand New”, and a plaque on the Walk of Fame in 1994, in Center City Philadelphia, including various awards and trophies from around the world. In May 2004 they were inducted into the Vocal Group Hall of Fame.

Russell’s departure from the group, in April 2000, has culminated in two separate, but equally important events. The first event was the release of his first solo CD, “A Matter Of Style”, in September 2002, with the collaboration of Christopher Biehler, President of ForEverMore Music and Records, based in Rochester, NY. The second event was the formation of “The New Stylistics”, who are dedicated to preserving the sound of the original recordings. As Russell Thompkins, Jr. & The New Stylistics they are committed to delivering high quality vocal performances on stage and in the studio in a professional and masterful style. Russell brings to the table an unparalleled level of talent, dedication, and professionalism. His major goal and mission is to provide his fans, friends, and supporters, who have remained loyal for over 30 years, with the same quality of music and showmanship that they have come to know and love.

Raymond Johnson, who made his debut with the Stylistics as a guitar player, went on to become a singer and performed with them for 15 years. Raymond is a talented vocalist, musician, composer, arranger, and audio/video producer. A native Philadelphian, Raymond had performed wit the Stylistics, Portrait In Black, the Thompson Brothers, and the Valvadores. Raymond’s work can be found on these albums, cassettes, and CD’s: Russell Thompkins, Jr.’s “A Matter Of Style”, on ForEverMore Records, the Stylistics’ “Hurry Up This Way Again”, Closer Than Close”, and “1982” on Philadelphia International Records, and Loni Gamble’s debut album “Circles” on Tracey Records. Raymond’s dedication and contribution to the original group continues as a valuable member of The New Stylistics. Raymond’s talent, drive, and determination, along with his many years of experience, have made him a natural choice for The New Stylistics.

Jonathan Buckson, also a native Philadelphian, comes from a family of singers who instilled in him the desire and enthusiasm to hone his craft as a singer and stressed the importance of singing quality leads as well as backgrounds. His older brother would often say “The impact a song could have on an audience could rest solely on how well the background is sung”. This is a sentiment that Jonathan still believes today and is clearly evident in his background performance with the Stylistics. With over 35 years of musical experience he has traveled throughout the U.S., singing with local groups such as the Electro Explosion, the Ovations, Priesthood, and Portrait In Black. As a talented writer, with a love for music and a desire to pass down some of his Philadelphia talent Ericka Glenn, which brought her to the attention of Voorhees, NJ based Devine sound Entertainment Company who signed her within a matter of weeks. He has also been instrumental in landing a deal for Philadelphia rapper Pretty Ugly. Jonathan has also worked as a writer and A&R producer for the Black Friday Entertainment Company, who is directly responsible for the signing of the following artists: Beanie Siegel (Rocafella/Black Friday), Charlie Baltimore (Interscope), Eve (Interscope), and Maurice Wicher (Interscope/Aftermath). He has also worked on the Pure Soul project for the Island Black label. Jonathan’s dedication to and love of music has qualified him to become a member of the New Stylistics.

James Ranton, who was born and raised in Philadelphia, was first introduced to music, as a small boy, by Clara Ward and her gospel singers, who lived in the same neighborhood as his family. During the summer months he would often attend music sessions at the Second Baptist Church at Germantown Avenue & Pike Street. James became a member of a local singing group called the Precisions, who just happened to be under the same management (HBC Productions) as the Stylistics. The Precisions recorded a song titled “Take A Good Look”. When the group broke up James made a connection with Russell Thompkins, Jr. whom he had been introduced to by his cousin, Alvin Ranton, years before. His cousin had previously sung with Russell in a group called the Monarchs. James’ sharp flair for choreography landed him a position with the Stylistics as their choreographer. James’ adept talent for singing and dancing has earned him a position as one of The New Stylistics.

It was destiny that brought the New Stylistics to Russell Thompkins, Jr. the connection was evident through their musical history. From the 30 years that Russell spent with the original group, to the 15 years that Raymond Johnson spent with the original group, to the time that Raymond and Jonathan Buckson spent as portrait In Black, to the time that James Ranton spent in the Precisions and as a choreographer for the original group, the connection has always been there. For Russell Thompkins, Jr. & the New Stylistics the pieces have fallen into place, the stars have aligned, and the journey has come full circle.

Russell Thompkins, Jr. & the New Stylistics exemplify ‘stylistic’ in the true sense of the word. They are true masters of style. They exude and radiate professionalism and dedication. They have talent extraordinaire. Their goal is to continue the tradition that Russell Thompkins, Jr. spent 30+ years of his life creating, to be true to the music, and to consistently provide audiences, around the world, with outstanding performances.