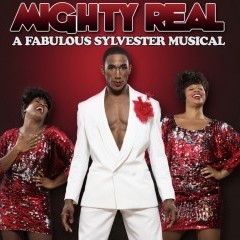 MIGHTY REAL: A FABULOUS SYLVESTER MUSICAL, the hit musical celebration of the life and music of the original 1970s “Queen of Disco,” Sylvester, comes to the Ultimate Disco Cruise in 2020! Co-writers Anthony Wayne (Broadway: TOOTSIE, Once On This Island, Pippin, Anything Goes) who plays SYLVESTER and Co-Writer/Director Kendrell Bowman (An Evening with Phyllis Hyman, A Soulful Christmas, Queens of Soul) bring you on the journey of SYLVESTER and THE WEATHER GIRLS/TWO TONS O’FUN like you have never seen before!

MIGHTY REAL: A FABULOUS SYLVESTER MUSICAL made its New York Off-Broadway premiere in a critically acclaimed limited engagement at Theatre at St. Clement in 2014 & then went on to tour nationally in Philadelphia, D.C., Miami & Atlanta. The show is current being prepared for Broadway.

Through his trials and tribulations and his glitzy, glamorous lifestyle, SYLVESTER was a symbol for fabulousness and a pioneer in the LGBTQIA community. His many disco classics include "You Make Me Feel (Mighty Real)," "Dance (Disco Heat)," "Do Ya Wanna Funk" and "Can't Stop Dancing." Get ready to DANCE TO DISCO HEAT BECAUSE THIS WILL BE MIGHTY REAL!