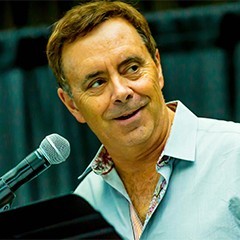 Music Host Joe Johnson graduated from Miami Killian Sr. High School at the time when the 70’s music charts were bursting with the songs of the Ultimate Disco era by KC and the Sunshine Band, Diana Ross, George McCrae, The Manhattans and many others.

After winning a record on a Miami radio station, Joe found his calling wasn’t just calling in, he wanted to be ON, and he’s been on the air ever since in Miami and nationwide with his syndicated radio show, Beatle Brunch.

The highlight of his time on-air has been interviewing music legends like Harry “KC” of the Sunshine Band, Gloria Estefan, Gary Wright, Frankie Valli, Maxine Nightingale, Peter Frampton, not to mention Paul McCartney, the most successful solo Beatle of 1970’s top 40.

In 2015 Joe was named “Best FM Radio Personality” in the Miami market and is a 6-time AIR Award radio winner.

On board, Joe loves hosting our Q&As, pairing up the artists who’ve joined us, to talk about their rise to stardom, sharing their personal stories and their love for the music of The Ultimate Disco Cruise. The best part is that YOU get to meet them - take a photo, get a signature and selfie.

When not behind the radio mic, Joe is a stand-up comic who hosts live events serves as Master of Ceremonies for local and national charities and can be heard weekday mornings on 91.3 WLRN, Miami.

Joe J lives in Plantation, Florida with his wife Coop. He is also Music Host on The 70’s Rock & Romance Cruise AND The Flower Power Cruise! Looking forward to meeting you on board!

If you haven’t already booked your cabin for The Ultimate Disco Cruise, use promo code BEATLE BRUNCH to save!