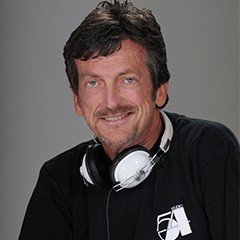 A bona fide legend in the Music Industry, DJ Robbie Leslie has been in the nightclub business for 45 years. One of the First Generation DJs, Leslie started his career on Fire Island at the Sandpiper (now the Pavilion) in 1975… an auspicious beginning.  From there he moved on to New York City, where the list of clubs at which he regularly performed reads like a ‘Who's Who’ of Big Apple nightspots:  The Saint (and subsequently the Saint-At-Large), Studio 54, Underground, Private Eyes, Palladium, the Red Parrot, 12 West and the Ice Palace. Over the years, he has made numerous guest appearances at Trocadero Transfer and Dreamland in San Francisco; Axis, Probe, Circus, and Studio 1 in Los Angeles; Heaven in London, and clubs in Dubai, Berlin, Budapest, Moscow, Sydney, Copenhagen, Stockholm, Toronto, St. Maarten, Punta Cana, Cancun, and San Juan…the list is nearly endless. For twenty years he has been the Resident DJ for RSVP Cruises and Vacations. In 1988 he was honored by being selected to play the final set at The Saint's forty-hour closing, The Last Party. In 2014 he was chosen to be the final DJ at the Saint-at-Large Black Party/RITES XXXV for its last installation in New York City's Roseland Ballroom.

As the disc jockey for New York City's Pier Dance of 1989 and 2004, Leslie played to a record-breaking crowd of over 12,000. He topped that number in 1997 while playing the post-parade celebration at San Francisco's Embarkadero – 20,000!  Recently he was honored by the industry and his peers with the National Hi-Energy D.J. of the Year Award, sponsored by Dance Music Report.  He received the Dixie Award for D.J. of the Year in 1993. In October 1999 Leslie was presented with the third annual DJ Music Award for his lifetime contribution to the world of dance music.  And in 2013 he received the FIP Historical Preservation Society's inaugural History Maker Award. Robbie is approaching his 10th anniversary on the airwaves with his weekly SiriusXM Satellite Radio broadcast of "Robbie Leslie Presents," which airs Fridays and Mondays.