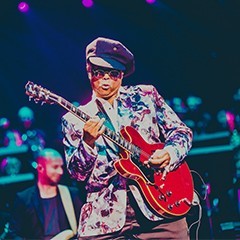 Veteran, Grammy Award-winning and multi-platinum recording artist Al McKay has a long history of creating songs that feel good to the body and soul. The former Earth, Wind & Fire guitarist teamed with group founder Maurice White to pen the band’s seminal hits “September” and “Sing A Song” and honed his chops playing with Ike & Tina Turner and Sammy Davis Jr.

McKay continues in this tradition with “Heed the Message,” his latest offering from his band Al McKay’s Earth, Wind and Fire Experience. In the spirit of McKay’s eight years in Earth, Wind & Fire from 1973 to 1981, “Heed the Message” is rich with impressive harmonic backing vocals, ample moving saxophone runs, driving funk bass grooves and uplifting lyrics: “Don’t think twice when your feeling is right,” “Try meditation,” and “Love is the calling.” http://bit.ly/HeedTheMessage

“The song’s message is Do the best you can,” McKay explains. “Be true to yourself. Don’t let anything get in your way. Whatever you consider being successful, don’t let it stop you from doing what you do, what you’re here for.” McKay has a personal connection to the song’s theme.

“I create a lot when I’m in my depressed mode,” he says. “But playing is really therapeutic, it gets it out. Playing for me is the best way to release.” His intention is for the song to have a similar impact on listeners.

McKay credits the late Maurice White with encouraging him to become a songwriter. White would begin writing lyrics as he listened to McKay improvising on his guitar. “In the dressing room, we used to have a tuning guitar room. After I would tune, I would start playing these tunes and I could hear [Maurice] singing. That’s how we wrote ‘Sing A Song.’ That’s how we wrote The Emotion’s ‘Best of My Love.’”

McKay describes White as his best songwriter partner and was saddened by White’s passing to Parkinson’s disease in 2016. “It was difficult,” McKay recalls. “I didn’t realize it was taking such a turn. Last time I saw him was at the Rock and Roll Hall of Fame when we were being inducted.”

McKay is working on a new album. In addition to working with some of his bandmates, he’s also in talks to collaborate with a few of the music business’ hit-making, award-winning songwriters and producers. “I have some exciting things in the works,” McKay explains. “It’s just too early to share the names.”

One of McKay’s recent works is a feel-good, dance song “Everybody Get Up” that the band has been playing during their European concert dates. “They love it in Europe,” he says.

The tour set pays homage to Earth, Wind & Fire. When the band went on an extended hiatus in the 1980s, McKay created Al McKay’s Earth, Wind and Fire Experience and reunited many original Earth, Wind & Fire band members, including Verdine White, to resume playing together. “I had damn near the whole band,” McKay says with a laugh. “I’d like to continue in Earth, Wind & Fire’s tradition.”

Prior to joining Earth, Wind & Fire, McKay was hired on the spot to play with Sammy Davis Jr. after demonstrating his mastery of the then-new wah-wah pedal. He played extensive Vegas dates with Davis before performing with the likes of Pearl Bailey, Andy Williams and Isaac Hayes.

One of McKay’s most impressive tenures would be touring with Ike & Tina Turner, a gig he landed at 18, not long after finishing high school. McKay accompanied a bandmate to an Ike and Tina Turner rehearsal and impressed Ike with his guitar skills.

“They were learning ‘Losing You’ by The Temptations.’ Ike was arguing that it was two guitars playing the opening line. I could play so I interjected, ‘That’s only one guitar.’ People looked around like, Who’s this little high school dropout? Ike said, ‘Oh, yeah, you know how to play?’ I said, ‘Well, I’m left-handed.’ I took his Stratocaster and played it upside down. The next day I got a call. He wasn’t even looking for a guitar player. We just hit it off.’”

Exactly five decades later, McKay is still going strong and motivated to create. “I’d like to try music with films,” he reveals. “I’d like to be able to see something and feel and be inspired. I would like to give it a shot and see what comes up.”

Movie scoring would be a great next venture for McKay. In order to make it happen, he only needs to revisit the lyrics of his new song “Heed the Message”: “Don’t think twice when your feeling is right.” https://soundcloud.com/almckayallstars/heed-the-message